Opening
Chess - makes use of various chess openings. A chess opening is the group of initial moves of a game (the "opening moves"). Recognized sequences of opening moves are referred to as openings and have been given names such as the Ruy Lopez or Sicilian Defence. They are catalogued in reference works such as the Encyclopaedia of Chess Openings. There are dozens of different openings, varying widely in character from quiet positional play (for example, the Réti Opening) to very aggressive (the Latvian Gambit). In some opening lines, the exact sequence considered best for both sides has been worked out to more than 30 moves. Professional players spend years studying openings and continue doing so throughout their careers, as opening theory continues to evolve.

The fundamental strategic aims of most openings are similar:

Most players and theoreticians consider that White, by virtue of the first move, begins the game with a small advantage. This initially gives White the initiative. Black usually strives to neutralize White's advantage and achieve equality, or to develop dynamic counterplay in an unbalanced position.

Middlegame
The middlegame is the part of the game which starts after the opening. There is no clear line between the opening and the middlegame, but typically the middlegame will start when most pieces have been developed. (Similarly, there is no clear transition from the middlegame to the endgame; see start of the endgame.) Because the opening theory has ended, players have to form plans based on the features of the position, and at the same time take into account the tactical possibilities of the position. The middlegame is the phase in which most combinations occur. Combinations are a series of tactical moves executed to achieve some gain. Middlegame combinations are often connected with an attack against the opponent's king; some typical patterns have their own names; for example, the Boden's Mate or the Lasker–Bauer combination.

Specific plans or strategic themes will often arise from particular groups of openings which result in a specific type of pawn structure. An example is the minority attack, which is the attack of queenside pawns against an opponent who has more pawns on the queenside. The study of openings is therefore connected to the preparation of plans that are typical of the resulting middlegames.

Another important strategic question in the middlegame is whether and how to reduce material and transition into an endgame (i.e. simplify). Minor material advantages can generally be transformed into victory only in an endgame, and therefore the stronger side must choose an appropriate way to achieve an ending. Not every reduction of material is good for this purpose; for example, if one side keeps a light-squared bishop and the opponent has a dark-squared one, the transformation into a bishops and pawns ending is usually advantageous for the weaker side only, because an endgame with bishops on opposite colors is likely to be a draw, even with an advantage of a pawn, or sometimes even with a two-pawn advantage.

Endgame
The endgame (or end game or ending) is the stage of the game when there are few pieces left on the board. There are three main strategic differences between earlier stages of the game and endgame: 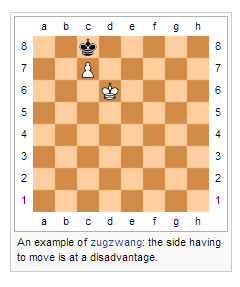 Endgames can be classified according to the type of pieces that remain on board. Basic checkmates are positions in which one side has only a king and the other side has one or two pieces and can checkmate the opposing king, with the pieces working together with their king. For example, king and pawn endgames involve only kings and pawns on one or both sides and the task of the stronger side is to promote one of the pawns. Other more complicated endings are classified according to the pieces on board other than kings, such as the "rook and pawn versus rook endgame".